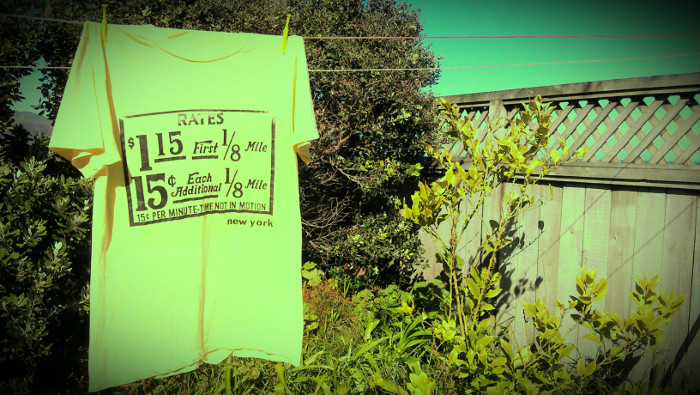 I was once asked for the shirt off my back. It was in Wanganui, outside Big Orange café. The sun tanned the pavement bricks, the breeze ruffled the petals of flowers in hanging baskets, and Ben Crotty asked if I would give him the shirt off my back. It was a good shirt, he said, and he offered a swap. His shirt was skin tight; there was a painting on the torso, and it was sky blue on the sleeves (at least that’s how I remember it). Mine was a yellow op-shop number from America, with old New York taxi cab fares printed on it. It seemed a good swap.

At the time I remember thinking it was a defining moment. I should give Ben my shirt, I thought. Then I just said “See ya later” and went down the alleyway to the supermarket to buy some more dishwashing detergent because we were out. Perhaps I was ashamed of my milky white chest, and didn’t want to unsheathe my shirt amongst the coffee drinkers on Victoria Avenue. Or maybe I just wasn’t a generous person.

It’s unlikely this moment registered on the concern-radar for Ben. But you carry these little broken moments with you—minor exchanges where you reckon you could have done better. They hang around like manky old pegs on a washing line. I seem to be a particular rememberer of these moments, and when I share them with the people involved many years later the response is invariably “Huh?” They don’t recall. Not only do I remember, but I over-remember. I add more significance than is warranted to commonplace occurrences, and these tend to accrue additional significance in my mind over time—memory interest—until here I am, deliberating over a faded shirt.

The shirt is threadbare and holey now, and hangs limply on the washing line—we have grown weary of each other. Sometimes when the wind kicks up the shirt flaps a little, signalling meekly for another, more generous back to cover. My new plan is to leave the house wearing two shirts: one underneath that I am loathe to part with, and an expendable one on the top that I can concede to anyone who asks for it—I’m a generous soul these days.