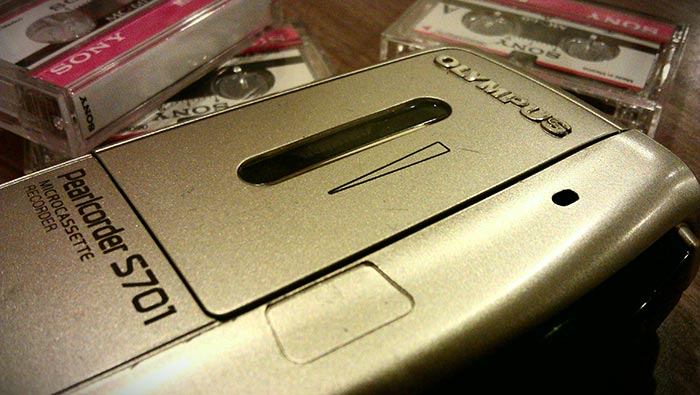 The wind was dusting up the Newtown air; it was difficult to see clearly. Taking refuge in Cash Converters, I slipped between exercise contraptions from nineties infomercials and walls of sad, scratched compact discs. I spied an old Olympus Dictaphone, labelled with its details and history like a museum exhibit. The year was 2004, and that kind of analogue technology was becoming obsolete; soon everything would be digitized and all the tapes unspooled.

I bought the Dictaphone for $40 (tech relics need believers to keep the mythology alive). At the time it was a small fortune to spend on something I couldn’t eat. I took it home and put it next to the typewriter.

My plan du jour was to become an investigative journalist. It sounded exciting and romantic—peeling open New Zealand’s inner workings like Duraseal from its backing. I’m a little hazy on whether the Dictaphone was an accessory for this venture or the inspiration for it. Let’s assume the latter.

I trained as a journalist. And when I say “trained” I mean that I lived in the Marlborough Sounds for six months and did an online course in investigative journalism. My internet stick had a one-gig cap. When it came time to practise interviewing, I interviewed my dad. He was the only other person who lived there. We were a couple of hermit crabs hiding out in the bay.

So I became a journalist. And when I say “became” I mean that I started saying that I was, and people believed me. I figured the rest would work its way out from there. For a while it did.

That was before they took my face.

My first proper gig involved writing articles on security in New Zealand. Security wasn’t a particular speciality of mine—in reality I knew nothing about it. I had won the work operating purely on instinctive bravado, which, although bereft of insight, can actually get you quite far.

The assignment was to report on some new satellites that the defence force was installing at Ohakea, out the back of Sanson. The editor assured me that the head defence guy, Richard, was fine to chat about it. I happily accepted that a military officer would invite a rookie journalist to his office for a chat over a cuppa. Maybe even a biscuit.

There was a lot of obfuscation. I never saw Richard’s face. The defence guys (there was a team of them by this point) thought I wanted a sit-down interview, and that was a problem because as far as they could tell, I was a journalist. They were relieved—secret sighs—when I just sent them a handful of questions in an email. They were also probably relieved when they googled me and came back with no results, save for an entry in the 1999 New Zealand Secondary Schools Cross Country Championships for a certain Richard who was registered but never actually ran the race due to injury. I assumed they knew I wasn’t the American Richard Allardice, who was the key grip for Scooby Doo. No reply to the email was forthcoming.

There were some phone conversations. They never really got anywhere, but I recorded them anyway. I didn’t have a proper set-up to rig the Dictaphone through the phone and record the call; I just held the recorder up to the receiver. It was hard because that was where my ear was supposed to go. Sometimes the Dictaphone would slip out of my grip and knock against the receiver, making an awful scraping sound over the line. When I eventually conceded that this set-up was cumbersome, I borrowed my flatmate’s MiniDisc player, connected a microphone cord, and strapped the tiny mic to the phone receiver with Sellotape. Whenever someone else in the flat wanted to use the phone I had to rip it off.

In my imagination I sounded like the consummate professional over the phone: crisp, sharp, affable. I wonder if the receivers of my calls ever conjured the real image: a young guy in disheveled clothes, with unkempt hair and a patchy beard, wrangling with a makeshift recording apparatus running low on batteries. Clearly this was a correspondent in the making. “And now we’re crossing live to Richard Allardice…”

The matter of the new satellite went in circles, as did my quest for journalistic credibility. The defence guys batted me away like a sandfly. I decided it was time to take the matter into my own hands: a reconnaissance mission. I didn’t have a driver’s licence (or possess the ability to drive to an acceptable standard) so I hopped in the passenger seat of my girlfriend’s car and had her drive me from Wellington to Sanson. It filled me with pride to know that I didn’t need to hitchhike or ride a bus anymore. I was going places: an investigative journalist on the road. I assumed that this was what Hunter S. Thompson and Jack Kerouac had intended for me.

We turned off at Sanson (Sanson’s sole purpose is for people to turn off from it). We weren’t entirely sure of the satellite’s location, but after a few laps of the Sanson backcountry we spotted it from the road. White. New. Distinctly a satellite. SECRET. It was smaller than we expected—about the size of a kid’s paddling pool pointed at the sky.

The bright warning signs seemed lacklustre against the overcast sky that day. Our approach over a stony country driveway had been crunchy and loud, but it was oddly quiet once we stopped. We were being watched. Some contractors for a large security company (whom I had also contacted but had been equally tight-lipped) were doing some work there.

I wound down the window and took pictures. I was wearing a pumpkin-orange cardigan. One of the contractors reached inside his vehicle, withdrew a camera with a very long lens, aimed it in our direction and took a series of measured shots. And he kept looking. We left.

Then I freaked out. They had my face.

I spent the next few weeks worrying about how my face had been captured in a photograph and archived. I’d brought the government into my personal affairs—there was a spotlight on me. I tried to be positive, reasoning that if the New Zealand Security Intelligence Service was now involved I might get a bit of journalistic street cred, but thinking about it just made me more paranoid. The eye had turned in my direction, and it wasn’t blinking (Lord of the Rings, once an escapist comfort, now provided terrifying metaphors to overthink the situation with).

I was also worried for the people around me whom I had inadvertently involved. The car was registered in my girlfriend’s mum’s name. The pictures they took would have captured the number plate. They were probably assessing whether she was not only a primary school teacher, but a political agitator as well.

Life marched on. I actually received an invite to the satellite launch in the end—secret canapés!—but I’d already fudged together another piece on internet banking, so I didn’t go. I forgot that the government might be monitoring me because I snooped on their satellite wearing a poorly camouflaged cardigan—until one day at a craft market in the Hutt.

It was one of those bright, clouded days that surprise you by burning your face—the kind of day where you make poor judgements.

I was at the craft market as an errand boy. My girlfriend sold the clothes she had made while I fetched snacks and coffee, and carried out nonessential craft-related tasks. Journalism wasn’t paying much. I stood there. It was at the Dowse. I was just another exhibit.

A guy with shiny corkscrews of hair approached me while I was waiting for a coffee. He said I looked so much like a friend of his he just had to take a picture to show him. It was a bit weird, but it was the kind of situation where it felt equally weird to say no. I half agreed, and with the silent acknowledgment of a digital camera we were done. He bounced away, happy. Too happy. Staged happy. My face had been snapped again, enshrined in a high-res close-up. Swindled by the cheery openness of someone I can only assume was a very good spy.

I didn’t hear much from the government after that, except for the usual letters from the tax department and the accident insurance corporation (regarding a series of accidents involving innocuous household objects).

I bumbled along at the security magazine until the editor decided all writers should have profile pictures in addition to a byline. It was the thing to do. Avatars were in—people wanted to see your face. In retrospect, I should have followed the lead of Steve Braunias when he wrote for the Listener. He eschewed the profile pic, adding a cartoon instead. He knew it was better they didn’t have your face.

I sent in a profile pic with my final piece of work, but the picture wasn’t included with the article. There was just a space where my face should have been. The assignments abruptly dried up after that. I guess the editor took one look and thought, no, that’s not the kind of face our readers want to see. He lacks credibility. Not investigative journalist material.